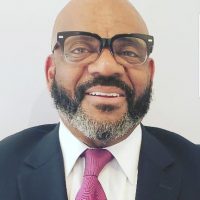 Gil’s keen leadership abilities were honed at his alma mater, Saint Augustine’s College, Raleigh, NC, while serving as student representative to the board of trustees (junior and senior years) and president of the Student Government Association. In 1976, he simultaneously received a Bachelor of Arts degree (with honors) in History and Government and commissioned a second lieutenant in the U.S. Army.

Due to his proven leadership and great interactions with students as Professor of Military Science, Colonel Knowles, upon retirement from the U.S. Army, assumed the position of Dean of Students, Saint Augustine’s College. His Respect to Connect method continued with his interactions with students. During his tenure, many student support program activities were altered for maximum benefit and communications with students markedly improved. His no-nonsense respectful and caring approach reaped great relationships with the students; many, many of these relationships have continued 20 years later. To quote a former student, “Dean Knowles would fuss me out about something I did wrong, however, would always call me Sir while doing it; he always kept it real…we loved this guy!” Gil’s legendary “Get Off the Grass” shouts are part of Saint Aug’s folklore 20 years later. His ability to give back to his alma mater during these years will always be treasured.

Upon his departure from UNCFSP, Gil wrote a book, Help Them Pull Their Pants Up…How Mentors and Communities Can Empower Young African American Men and launched Knowles What To Do (KWTD) Mentoring Solutions. Through KWTD, Gil facilitated lively interactive sessions for HBCU male students at Concordia College (now defunct), Selma, AL; Tougaloo College, Tougaloo, MS; Livingstone College, Salisbury, NC; Clinton Junior College, Rock Hill, SC; Benedict College, Columbia, SC; and Philander Smith College, Little Rock, AR. He authored the Links to Substantive Mentoring Train the Trainer facilitation guide and video for the Links, Incorporated’s National HBCU Initiative. He also served as Mentoring Activities Designer/Mentor for the Department of Education’s Global Entrepreneurship Fellows. Although now retired, he is sought out to speak at Mentor functions, consult with mothers of single-parent households raising sons alone, and continues to offer guidance/advice to many young men. In many circles, Gil is known as the “Mentoring Guru” for young African American men. Video testimonials from some of his mentees: www.vimeo.com/knowleswhattodo